Good Dogs Co Updated: April 17, 2020 0 0
This article may contain affiliate links. When you purchase through links on our site, we may earn an affiliate commission. 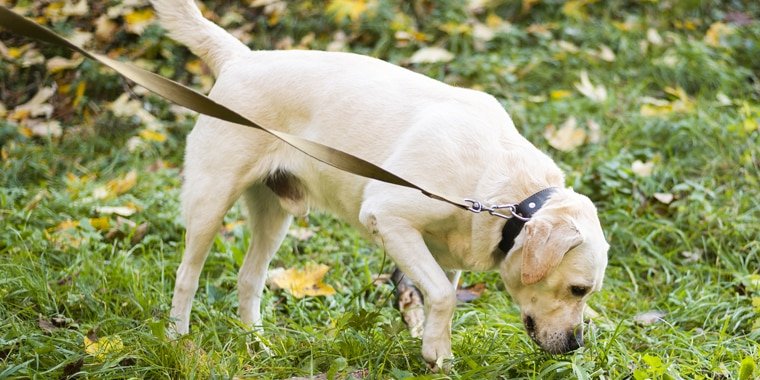 One of the stirring problems of having a pet, specifically a dog, is its sustenance. Familiar questions pop out like, “What is the best type of food for this breed?” or “Is this type of table food an allergen for my dog?” or even, “Why dogs consume grasses and are they safe, to begin with?”

The case of dogs consuming grass is not uncommon. A casual stop on lawns, sniffing and nibbling after walking distances in a park might be an ordinary scene for pet owners now and then. In this article, several reasons are outlined in this natural behavior by dogs.

According to Volhard & Volhard (2005), eating grass is one of the dog’s instinctive behaviors. One reason related to this mechanism is that grasses safeguard dogs from indigestion and food poisoning by inducing vomiting. At first glance after consumption, this may be contradictory in nature, but this is actually seen as a purging mechanism of animals. Grasses, specifically, are emetic in nature, causing internal stomach reactions with indigestible food consumed in prior. To some accounts, worms can be expelled from the host through the response with the lining of the guts.

In addition, it is also found out that the prickly texture of grasses, induces irritation with the stomach linings. These are exhibited when dogs consume grasses in raw form and without actually chewing the whole fibers (Grogan, 2006).

Grasses are not only scientifically rich in fiber and other nutritional values but also in terms of organoleptic attributes. This taste is actually good for dogs and can fulfill dietetic needs even in small amounts and in moderation without the expense of vomiting already (Becker & Spadafori, 2007). To most dogs, grasses are occasional snacks to them already.

Another rationale that can be drawn out from the mechanism is that grass supplements the body with magnesium. This mineral is found in chlorophyll, the green pigment found in plants, which is the site of photosynthesis. Magnesium deficiency in dogs is related to an electrical imbalance in the body affecting involuntary alterations in muscle movements (McGreevy, 2009).

Furthermore, dogs are also omnivores in nature. This means they both devour meat and plants in their lifetimes. In this respect, they find the act of eating grasses self-medicating. This cathartic attribute is the most common intuitive behavior owners can think of. Accounts were saying that dogs, which are observed to be relatively lumpy or uneasy in a day, find themselves going to the bushes and eat green plants. Patches of poison ivy, specifically, are found to be associated with easing the pain brought by arthritis. This can be traced back to the Rhus Tox chemical content of the plant, which is medically related to the treatment of rheumatism and other joint problems (Volhard & Volhard, 2005).

Interestingly, dogs have the instinct of distinguishing different types of grasses and their functions to their bodies. Wheatgrass, for instance, is known to be agents of digestion. Old historical records showed that a species called Cynosurus cristatus was coined as “dog-grass” due to its natural compatibility with dogs, especially when feeling sick. It is characterized as a type of grass with long jointed roots and small fibers. Its medicinal values are related to healing liver and gall obstructions as well as inflammations in the belly. The species’ seeds are also scientifically found out to be powerful on their own. Other species like Tricitum caninum (fiber-rich wheatgrass) and Agrotis Canina (brown grass) were also evidently consumed (Berdoe, 1950).

Not only that, in the social aspect of this mechanism, dogs’ sphere of influence converges from time to time in terms of the grass of choice through socialization. Dogs can behave in the healing process in such a way that they assist each other. In another social experiment, it was noted that puppies learned to eat grasses from observing their mother’s behaviors. This follows the natural course of animal growth in which the offspring’s actions are patterned from their descendants. Other factors that motivate dogs to consume grasses are yet to be found out, conversely.

With all these things under consideration, it is concluded that grasses are generally safe to be consumed by dogs. Of course, everything has to be taken in moderation; no health problems are associated with grasses mostly, but if you find your dog exhibiting unusual behaviors after consumption, professional advice must be heeded to find out if potential illnesses can be attributed to the consumption. Medical explanations must be paid attention to for proper administering of taking care of dogs.

In addition, it is also safe to know as pet owners the conditioning process of the surrounding plants. Questions like, “Was heavy spraying of pesticides or herbicides employed to these plants?” must be critically evaluated before allowing your dogs to chew on those grasses. Chemicals are known to have various side-effects upon consumption, even to humans in their daily food. Things like this must be treated as an important factor in the sustenance of a pet.

Furthermore, to make sure plants consumed by dogs are free of undesirable chemicals, it is best to grow plants in your indoor sites for them to nibble anytime and supplement them readily with meats in their bowls. A vegetable buffet can be readily available then to your pets. Also, in this way, owners can instantly track any factors present if uncharacteristic behaviors are observed from pets. Eating such can be a clear indication that fibers are insufficient in their food, and as a constant companion, one should be especially wary of their diet and sustenance.

How to Remove a Tick from a Dog or a Cat?

Why Does My Dog Lick Himself? What to Do With Excessive Licking?