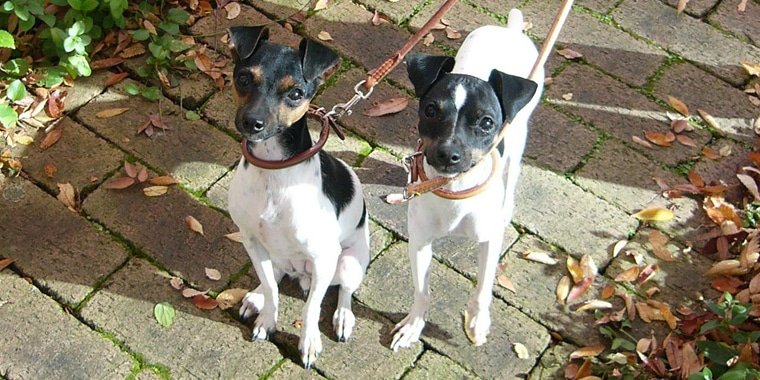 Just like any other country, Japan is home to some of the most popular dog breeds in the world. Dogs are valued as a national treasure in Japan, and most of the time, they can cost around thousands of dollars. This is especially true for rare breeds that can only be found in the country. Exporting them can be very expensive; nonetheless, some Japanese dog breeds like the Shiba Inu, have gained popularity worldwide, with breeders throughout the United States.

Without further ado, let’s get on to some of the most popular and adorable Japanese dog breeds and their temperaments:

Originating from the mountainous places of Japan, the Shiba Inu is one of the most popular Japanese dog breeds. It’s one of the smallest breeds in the country which is greatly mistaken for the Akita Inu and Hokkaido Inu. This double-coated breed comes in various colors such sesame, black, tan, red, and white.

The breed is relatively small and has a unique bloodline. Another thing that differentiates a Shiba Inu is its “Shiba scream”, a high-pitched noise which they produce when happy or excited. Additionally, Shiba Inus are strong-willed, very independent, and are best placed under training.

Bold and spirited, the purebred Shiba Inus were originally bred as guard dogs and were used for hunting. Unfortunately, their extinction came after the World War II due to bomb raids. As a result, the Shiba Inus you see now were the result of interbreeding in an effort to save their species. When healthy, this gorgeous breed has a life span of 12-15 years. However, they can suffer from luxating patella, hip dysplasia, and a range of allergies. 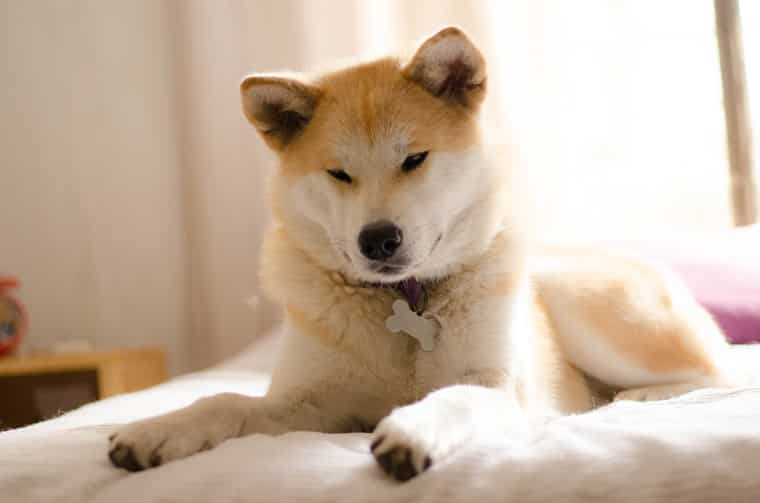 The Akita Inu is considered the largest Spitz breed from Japan since it shares ancestry and traits with other breeds. For instance, their double coat and thick fur makes them withstand the cold weather.

Just like the Shiba Inu, this breed almost became extinct after the World War II. Nonetheless, both the Akita Inu and Shiba Inu have different temperaments and size, as the former is a bit larger.

The Akita comes in two distinctive variations: that of the Japanese “Akita Inu” and the American “Akita”. In Japan, Hachiko became the most famous Akita Inu, and it’s his story that gave this dog breed an international recognition. What makes the Akita a popular family pet is the affection they show their owners. This could explain why they are one of the most expensive dog breeds in the world.

They are also revered for their loyalty, but they can really be unpredictable around other dogs or strangers. Although they do not do well with other dogs of the same sex, this breed is very good with children. 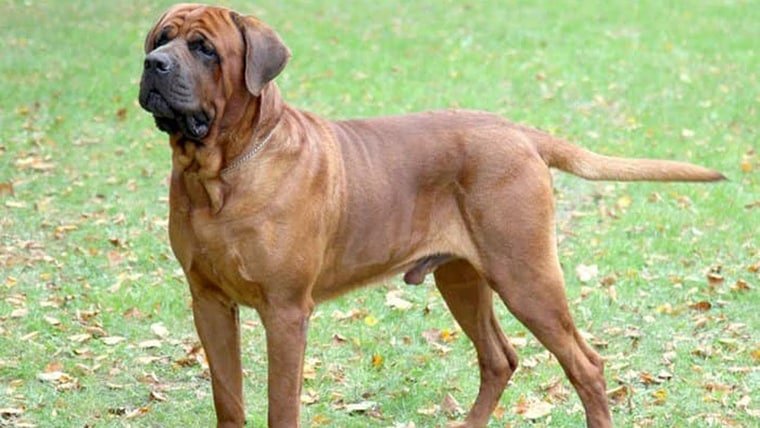 Fearless is the word that can best describe this rare breed from Tosa, Japan. The Tosa Inu is large and known as a fighting dog due to its history as being used in legal dog fights. A typical Tosa Inu measures up to 23 inches in height and weighs about 100-200 pounds. Although they were originally bred as fighting dogs, they are now used as guard dogs.

The Tosa Inu was bred in Japan during the 19th century alongside other breeds such as the Mastiff, English bulldog, bull terrier, German pointer, St. Bernard, and Great Dane.

However, besides being fearless, this breed is sensitive and patient. Experienced dog owners can attest to the Tosa’s quiet and docile nature. They protect their family and love to please their owners, although they are wary of strangers. They need to be socialized at a tender age and taken through obedience training to reduce their chances of harming people or other animals. 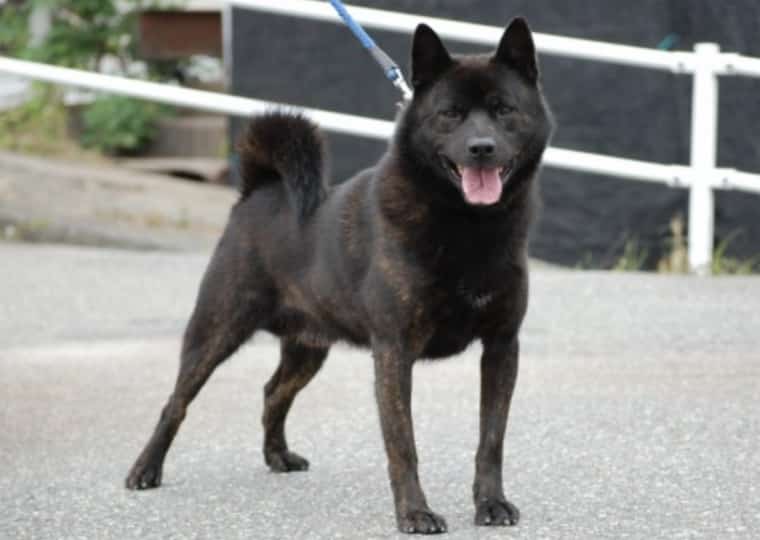 Kai Ken was originally a wild dog which was found in the province of Kai. It is a rare breed that was bred to hunt in the mountainous areas of Japan. Kai Ken is medium in size and weighs between 25-55 pounds. This breed has 2 distinctive body styles: one that is skinnier and has features like a fox, and one which has husky-like features and a bear-like face.

Its distinguishing trademark is the tiger stripe fur which serves as a great camouflage during hunting. The Kai Ken is incredibly fast, intelligent, and can learn faster than most Japanese dog breeds. However, unlike other breeds, it is not independent.

This breed thrives well with owners who have an active lifestyle and requires early socialization. They also love to please and harness loyalty to the owner. 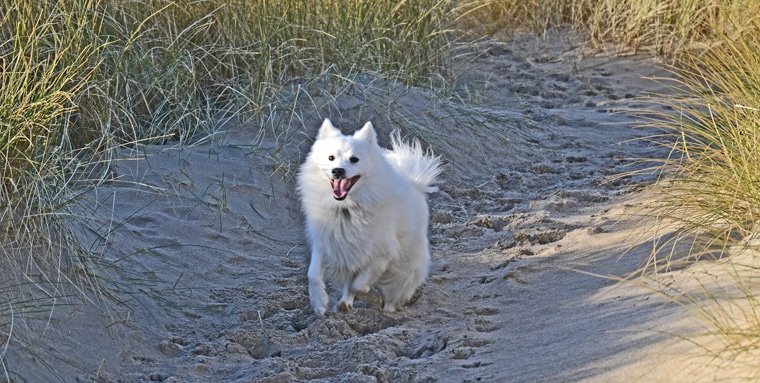 History has it that the Japanese Spitz came from the Germany Spitz which was brought from China to Japan in 1920. The Japanese Spitz has a white coat with long, dense fur. It also has pointy ears and wedge-shaped snouts just like other Spitz breeds. Moreover, a Spitz loves attention and cuddles, making it the perfect companion.

The Japanese Spitz is a small breed, standing at 12-15 inches and weighing 11-20 pounds. Despite being small in stature, it’s very alert and barks loudly at strangers if not properly trained. Spitzes are revered for their energetic nature and unwavering loyalty, making them the best companions for children and older people. 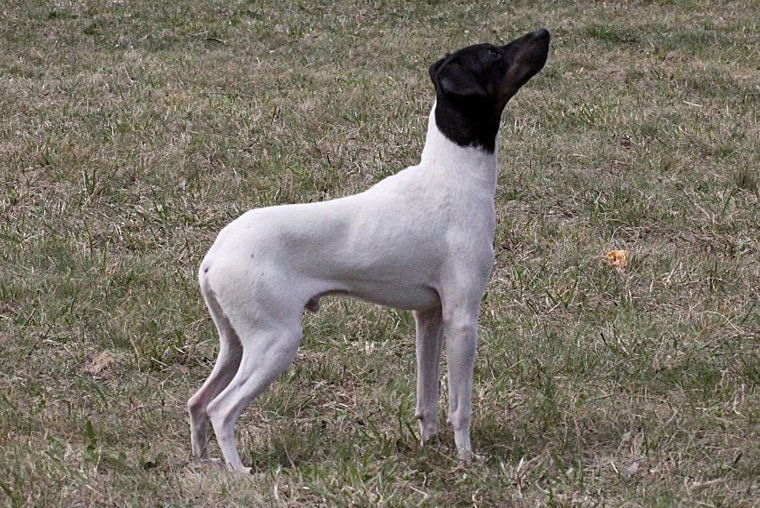 This is another Japanese miniature dog breed that causes no biting danger and is a winder companion. This rare breed doesn’t originate from Japan and is believed to have come from the Smooth fox terrier. These small dogs have a height of 13 inches and a short dense coat with stiff fur. They are easy to recognize due to their black head.

They are a favorite among dog owners due to their cheerful, affectionate, and vigilant nature. Moreover, they are known to have an attachment with a member of the family and be protective of them. If you want a cuddly companion that is eager to please and train, this little dog is just what you need. Although they get extremely well with children, the Japanese Terrier is a very rare breed in the country of Japan. 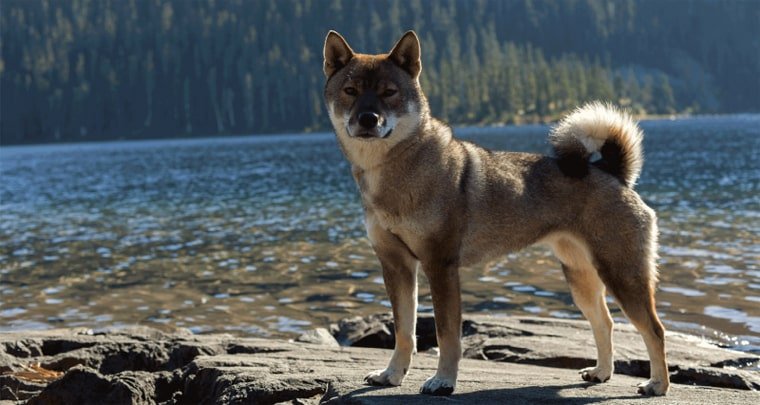 Another popular Japanese dog breed is the Shikoku Inu which was originally used for hunting. Although it is one of the native Japanese Spitz dogs, it differs from the other Spitz-type dogs due to its beautiful thick coat which is available in shades of white, black sesame, and red sesame.

Shikoku Inus have wolf-like features due to their pointy ears and triangular face. In fact, they resemble the Shiba Inu except that they are slightly larger in size.

Due to their excellent hunting ability, the Shikoku Inu has a lot of endurance and speed. One of the things they are known for is their great sense of smell. This explains why they enjoy being outdoors and were mostly used for hunt game.

Despite being independent, the Shikoku Inu has an adaptive behavior and therefore loves being cuddled and touched.

If you are looking for devoted companions, guard dogs, or hunters, these are just some of the most popular Japanese dog breeds you want to consider. A common trait that all these breeds share is loyalty to their owners. If you are an experienced handler, the Tosa, Akita, and Kai Ken would be a great option. However, first-time owners should be watchful as most of these breeds require training and socialization when they are still young.