How to Remove a Tick from a Dog or a Cat?

Good Dogs Co Updated: August 16, 2020 0 0
This article may contain affiliate links. When you purchase through links on our site, we may earn an affiliate commission. 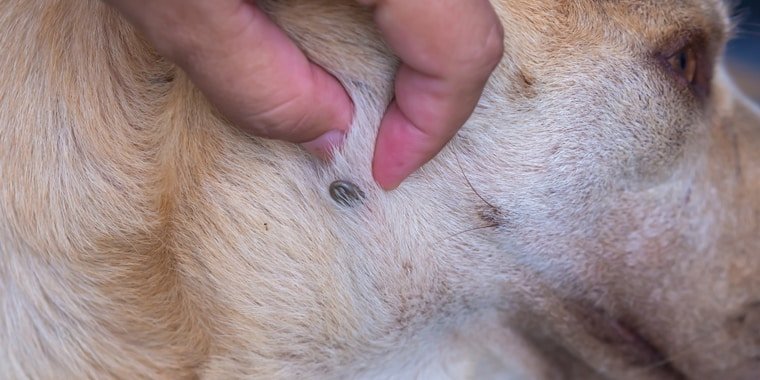 Ticks are common parasites that attack dogs and suck their blood. Although dog ticks are initially small in size, they swell up after attaching themselves to the dogs.

You may think that ticks do not harm your dogs because of their small size. However, they can cause dogs significant discomfort. They can also cause several diseases that may cause you severe pain.

Since ticks swell up when they are full of blood, you will easily spot them with your naked eyes. They are commonly found around the dog’s head and neck. When you do spot them, it is essential to remove them quickly and properly.

As the owner, you should treat your dog regularly to get rid of ticks and fleas. In particular, ticks can be removed using special tick removal tools instead of spraying.

How to Remove a Tick From a Dog

There are several ways of removing ticks from dogs. However, many people make a mistake of pulling the ticks out of the dog’s skin using their hands. This is dangerous because you may leave the mouthpart behind and cause inflammation or an infection.

If you are not sure about the right procedure of removing the ticks, consult a vet. You can also remove the ticks using Vaseline or alcohol as instructed by the vet. This is how to go about it.

1. How to Remove a Tick From a Dog with Vaseline

You can remove ticks from a dog using Vaseline by following these steps:

2. How to Remove Tick from Dog with Alcohol

If you have no Vaseline at home, you can use rubbing alcohol to remove the ticks instead. It is an approved and safe method of removing ticks. Here are the steps:

3. How to Remove a Tick from a Dog Without Tweezers

Ticks can also be removed without using tweezers. Tweezers are challenging to use. Additionally, tweezers increase the risk of leaving the head behind when pulling the tick out of the dog’s skin.

Therefore, you can forego tweezers and use tick removal tools instead. A tick removal tool will easily pull the ticks out. Slide its fork underneath the tick and pry it upward slowly to remove the tick.

A tick removal kit has two sets of tick removers specially designed for small and large ticks. Additionally, the kit has an identification card that will help you identify the type of ticks on your dog’s skin.

How to Remove a Tick from a Cat

Cats are also attacked by ticks, fleas, and other parasites. Cat ticks are visible with the naked eyes. Additionally, the skin areas attacked by ticks swell up, so it is easy to spot the ticks.

Cat ticks removal is a tricky process because the cat may be squirmy. However, you can follow these steps to remove the ticks on your cat’s skin:

It is inevitable to prevent dogs and cats from playing outside. In the process of playing, they are attacked by ticks and other parasites. However, the pests can be controlled by either spraying them or removing them. In particular, ticks can be removed from dogs and cats using tick removal tools or tweezers, alcohol, or Vaseline, as explained above.